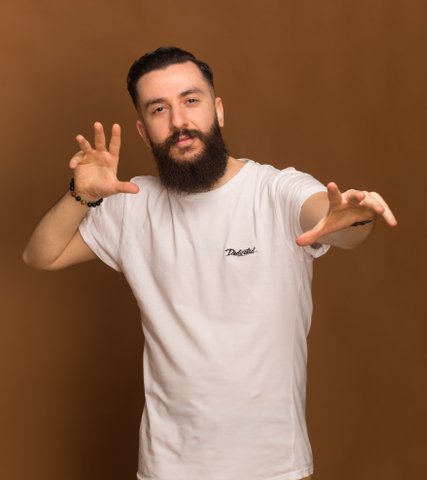 Julian "Joujou" is a dancer and choreographer. He works a lot with projects for urban dance culture, and with his two companies ID Crew and Kings Among Kings, he has a solid experience from both the commercial dance world and the platforms  where the hip hop culture is. He was a dancer during We love the 90's concert at the Telenor Arena in Oslo in 2017 and among other things, danced behind SNAP, which is behind the well-known song The Power. He has participated in battles around Europe as Battlehead Joujou ID Crew in recent years, where he won several times and also acted as judge. He is the Nordic champion in Hip hop at KOD World Cup 2017, where he will compete with the Swedish team next year in Germany for the European Championship. The styles Julian Represent are Hip Hop and Experimental, but he also has a great knowledge of the rest of the Street Style.

"Your journey begins within yourself, find your passion and let it lead you through life"

'Self trust is a must'

Dancer in Arghavan music video my past in Sweden.

Dancer in Telenor Arena in Norway.

Dancer & assistant in the tour Iceolo in Sweden.

Winner at Follo Battle 2vs2 allstyle in Norway.

Dancer in sir Was - the sun will shine, offical music video in Sweden.

Winner at VBG dance festival 2vs2 fusion in Sweden.

Host in the 30 minute piece Identity by Fuse fam in Sweden.

Dancer in Out of office at Trädgår'n in Sweden.

'Only you can set the limit of what you can achieve, stay limitless'

Judge at Tfda Showdown in Sweden.

Workshop at Studio in motion, summer camp in Sweden.

Judge at United 4 Hiphop in Sweden.

Judge at Ung Klubb in Sweden.

Judge at Face the rhythm in Sweden.

Workshop at Blåstället in Sweden.

In a gaming world surrounded by friends, spending the day out in the park enjoying the moment. Through dance, choreography, story and comedy we welcome you to our GAME WORLD! Hope you like it and get a good feeling after watching this dance film. Special thanks to Dedicated Brand for the collaboration. All the clothings are Fair-trade made, 100 % Organic a Sustainable Fashion Brand with cool clothes. www.dedicatedbrand.com

Arghavan - My Past OFFICIAL VIDEO HD

You will find Julian Joujou perform at Oooaw in Trädgårn.

You will find Julian Joujou as a Host to the new 30 min piece by Fuse Fam.

“Is it me who decides who I am or is it the time who defines who I am? Do you know who you are, even when everything changes?”